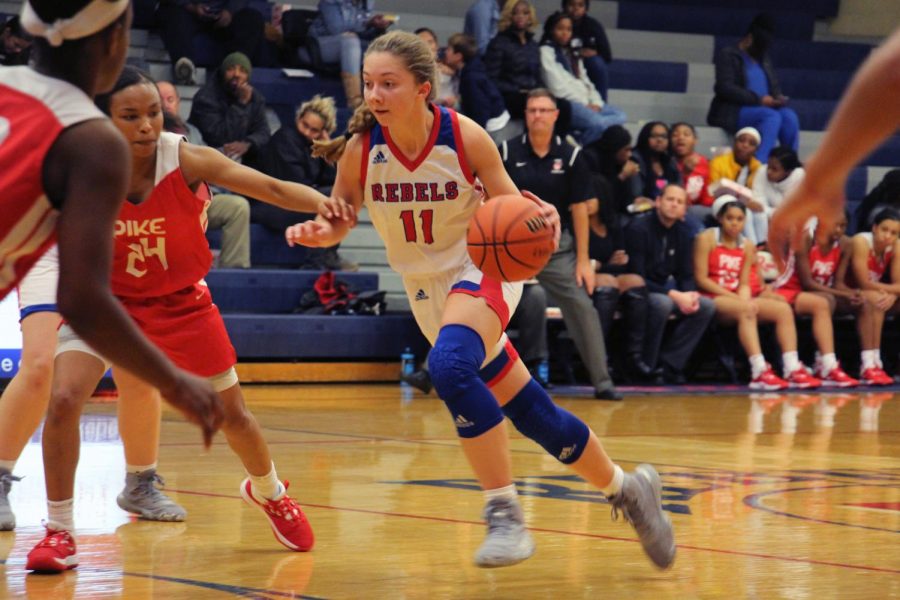 DRIVING IN THE PAINT: Senior Alana Vinson dribbles the ball down the lane and finishes at the rim. Vinson completed the game with 21 points and nine rebounds.

Most winter sports have already began their seasons. One of those sports is girls basketball. The team has started the season off strong through their experience, team chemistry, and defense.

“We have players with a lot of varsity experience,” assistant coach Tim Crissman said. “Our leadership within the program will help the younger players as well.”

Throughout the offseason, the basketball team has worked on and off the court with their game and team chemistry.

“Our coaches have really focused on the theme of unity,” senior Alana Vinson said. “They have instilled a sense of togetherness within the team that has helped us build a strong bond.”

In addition to focusing on the season, Vinson has committed to play Division I basketball for Eastern Illinois University.

With more achievements to come, the team continues to focus back on their season and team chemistry.

Two of the players on the team Vinson and senior Ellie Hammerschmitt have a friendship that takes back 10 years. They have been close friends since grade school and played basketball together ever since. The bond they have helps them compete together on the court.

“Other people frequently comment on the chemistry that we have when playing together, as we can often predict the other’s next move before she makes it,” Hammerschmitt said.

Their friendship has been long-lasting which can help the other team relate to each other.

“Ellie and I can always trust each other and it kind of rubs off on the other girls,” Vinson said.

Vinson and Hammerschmitt hope to use their friendship and relationship to help improve the team’s unity.

Additionally, the players have focused to improve their defense by making it one of their focal points. Limiting their opponents scoring has become one of their top priorities.

“We are looking to build upon our defense this year,” Vinson said.“We added a new defense that will really throw teams off.”

The team hopes to add more excitement to the game with this style of defense.

“Our defense surrounds, getting steals and allowing for fast breaks to get quick points,” Hammerschmitt said.

The team hopes to make a strong run in the state tournament and contend for a title. This has become one of their main objectives this season.

“I think our team has a combined desire to win sectionals this year,” Hammerschmitt said. “Coming so close to the title last year in the championship game, we all have a strong desire to come out on top this year in the sectional final.”

Starting the season off strong at the woodshed, the Rebels defeated Beech Grove 75-35. The team was led by junior Maddie Bischoff with 25 points and Vinson contributing 17 points. Additionally, defense was at the heart of the game as the team finished with 22 steals.

The team hopes to continue their recent success throughout the season.