Wrestlers come out of the state tournament on top

Making it to state is an achievement in itself, winning is an even bigger accomplishment 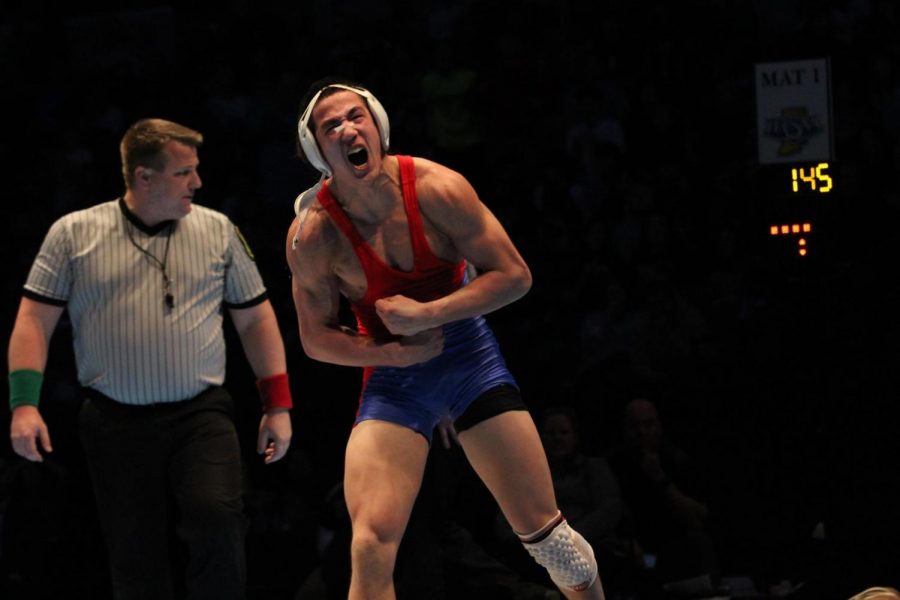 Going into the state tournament, Coach Wade McClurg knew it would be a tough road ahead.

“Our state is extremely difficult to win because it is a grueling four-week single-class tournament series with no wrestlebacks,” said McClurg.

At the end of the two-day IHSAA State Finals, Roncalli had two wrestlers come out on top, seniors Brayden Lowery and Alec Viduya, winning their weight classes after a tough but well-fought battle all weekend.

Also making it to state was senior Sam Slivka and freshman Bryce Lowery, making great achievements for the Roncalli program.

“I am extremely proud of the boys’ efforts, I am very happy for their families, I am thankful that we have supportive teammates that helped push them to greatness, and I am blessed that our coaching staff did a phenomenal job making sure they were prepared and ready to wrestle well,” said McClurg.

“It was an amazing feeling. I have never felt that way before,” said Lowery.

Bringing fans to the state tournament is always an important thing to do. The Southside Rebellion always shows out, supporting their wrestlers along the way to victory.

“It felt great to have a bunch of support from the Rebel family. It helped because it made me realize how lucky I am to be in the position I was,” said Viduya

Next year, the seniors plan to continue their academic and wrestling careers. Lowery will be wrestling for the University of Indianapolis and Viduya will be joining the United States Air Force Academy.

With the state championships and the 2019-2020 season finished, all eyes turn to the off-season and how the team will prepare for next season.

“It is always easier to move forward with success.  We hope that all of the great accomplishments from this season will motivate what looks to be a very young 2020-21 team to work extremely hard this off-season,” said McClurg.

It was important to McClurg and the rest of the coaching staff for the young wrestlers to have good role models, and they believe that was fulfilled with the leadership from this senior class.

“This young group we have returning next year had a lot of tremendous examples to look toward for guidance this season in Freije, Viduya, Lowery, Slivka, Page, and Fletcher.   We are hopeful that we will have some new selfless leaders emerge through their actions this off-season. “

Staying focused on Roncalli’s morals and values will be necessary in McClurg’s eyes, having a belief that it will lead to great achievements among the team.

“If they can stay centered around the principles our program was built on, attitudes of gratitude and exemplary efforts, then we will remain very optimistic about how good next year’s team can be,” said McClurg.