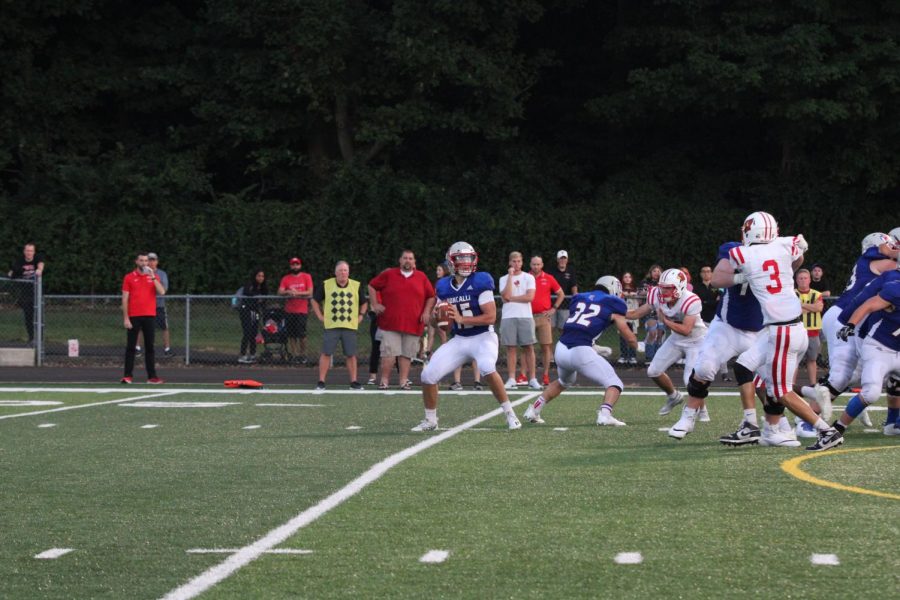 Starting at quarterback since his freshman year, senior Aidan Leffler’s career included leading the team to a state championship as well as multiple program records. While the season ended November 12,  Leffler said the relationships built will last a lifetime, and they will not be forgotten.

“It is obviously not where we wanted to be, but we will be able to look back and say we gave it all that we had. We had a great run and I am proud of every single one of my teammates and all that they have accomplished.,” Leffler said.

It’s more than just playing wins and losses, though, Leffler said. He believes what makes Roncalli football so special is the family-like atmosphere.

“It’s all about the brotherhood and tradition that make Roncalli football different from any other high school,” Leffler said.

But Leffler believes that the idea of family extends past the roster.

“It goes past our team and into the entire Roncalli community. It’s about the young kids who line up against the fence to high five the players as they go by, thinking ‘I want that to be me someday’. I know they are thinking that, because that was me once. We really are one big family,” Leffler said.

“It’s about keeping others up when things go wrong. And rather than shaming them, we lift each other up. I also believe in leading by example,” Leffler said.

The quarterback’s leadership does not go unnoticed. Offensive coordinator, Dave Burton, thinks of Leffler as a great leader.

“The best thing he does as a leader is the way he practices and prepares for each opponent. He gives 100% effort in every drill and play in practice. In this way he leads by example,” Burton said.

Burton said that Leffler’s demanding mindset of always getting better motivates the other players on the team. Without a doubt the coaching staff recognizes the leadership Leffler brings to the team, but the recognition goes beyond them. His teammates also recognize the role Leffler plays as a leader. One teammate in particular is senior running back Michael Gallagher.

“Aidan is a good leader on and off the field. Whenever something goes wrong, he keeps the team positive,” said Gallagher.

Leffler continued to lead the team into his last playoff series as a high schooler. But he doesn’t plan on being done with football once high school is over. Although undecided as to where he is going, Leffler plans on playing college football. He has received an offer from Columbia University, but he says it is too early to make a decision as of right now. In college, Leffler plans on studying business with a minor in secondary education. He then hopes to one day land a career in coaching.

Although the Royals and Leffler were unable to claim another state championship, a ring is not Leffler’s only accomplishment, in fact Leffler has broken many of the school’s program records including over 4,000 career passing yards, 63 career touchdown passes, and 123 pass completions in one season.

Although Leffler is proud of these accomplishments, he tries not to focus on them. He believes in finding his confidence from his starting experience and the team, rather than what a record says.

The team finished its regular season with an undefeated record of 9-0. After defeating Western and Lebanon in the first two rounds of sectionals, Roncalli faced Bishop Chatard in the sectional finals. The Royals beat Chatard 35-21.

At regionals the Royals came up short at Mt. Vernon; the final score was 27-21. The loss brought the teams unprecedented 25-game win streak to an end.