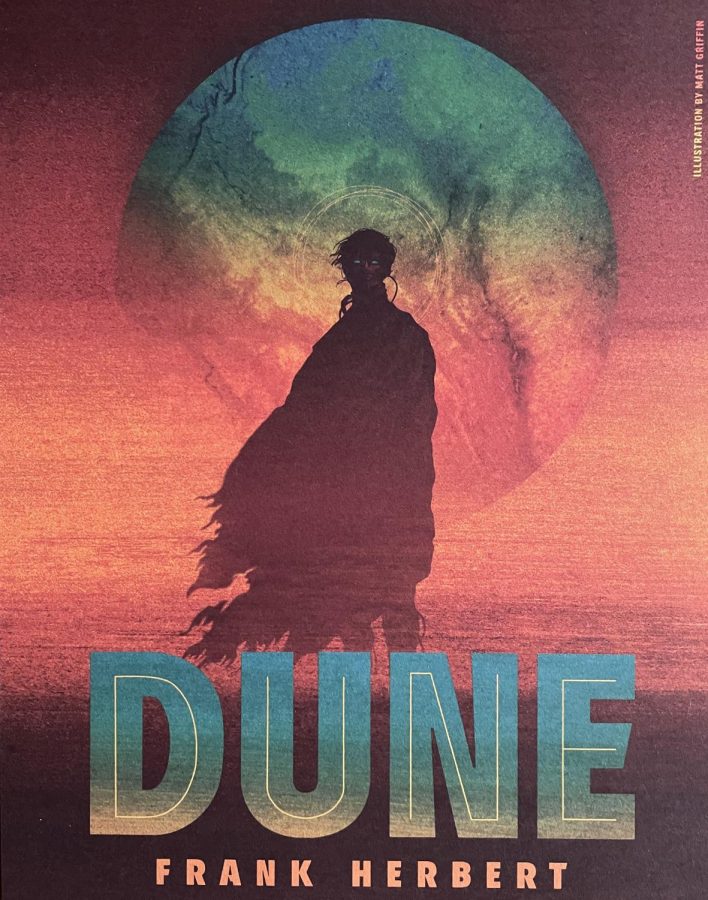 DESERT POWER: The movie poster for the new sci-fi thriller that was released on October 22, 2021 depicts Timothée Chalamet as Paul Atreides, along side are Zendaya and Oscar Isaac, Chalamet's co-stars. Dune is an adaptation of Frank Herbert's science fiction novel released in 1965.

In the world of Frank Herbert, Dune takes the audience into the year 10,191 where Paul, played by Timothee Chalamet, is next in line to lead House Atreides. These “houses” are government forms of the future, once humanity has reached out and colonized the galaxy.

On the planet Caladan, House Atreides is one of the most powerful houses, achieving and maintaining this position through land and air power. Duke Leto, played by Oscar Isaac, is the current head of House Atreides and the father of Paul. Duke Leto hopes to achieve the ultimate goal – desert power.

Throughout the movie, you journey with House Atreides as it moves from Caladan to a new home, Arrakis. Arrakis is a desert planet with many powerful and plentiful resources. In order to gain this desert power, House Atreidies must work to maintain these resources and be successful as the governing body of Arrakis.

Aside from the plot of the movie, which continues on from there, director Denis Villenueve works to incorporate a spectacular score and beautiful architecture and landscape. The score, written by well known composer Hans Zimmer, takes the audience through the galaxy and truly into the world of House Atreides.

Zimmer uses things such as scraping metal, Indian bamboo flutes, and Irish whistles in order to achieve a sound he has never previously accomplished in his work. The score is a perfect background to the scenery and architecture shown on screen.

Filmed in natural environments to avoid too many special effects, Abu Dhabi, Jordan and Israel were used as primary spots for the world of Dune. With the natural scenery, architecture was also a huge priority in the filming process. Being influenced by many architectural styles such as Egyptian Pyramids, Brazilian architecture, and World War 2 bunkers, it truly makes for a new film experience.

Frank Herbert’s initial book release in 1965 wasn’t a major success, but it is now known to be one of the most read science-fiction novels of all time. Inspired by a trip in 1957 to the dunes of Oregon, Herbert wrote the beloved series we know today. Villenueve managed to encompass the sci-fi world of Dune in the two and a half hour film, but this was only part one The second installation in the Dune universe is set to release in October of 2023, two years after its first release.